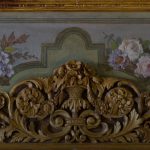 EVERY HALL HAS ITS OWN STORY TO TELL

At the Florian today you can still breathe and live the long and lively history of Venice, cozily sat in the magnificent salons of this splendid coffeehouse

Architectural history at Florian’s is fascinating. In the beginning, there were only two simply furnished rooms. By the mid-1700s, the Florian grew to include two new rooms.

In the mid-1800s, the coffee house was sold by the Francesconi family to Vincenzo Porta, Giovanni Pardelli, and Pietro Baccanello. In 1858, the new owners commissioned architect Lodovico Cadorin of the the Venice Academy of Fine Arts to restore and redecorate the Caffè: two new halls were added, and all the rooms were given new names. Since then, the Florian has been keeping its prestigious ambiance and atmosphere unchanged. 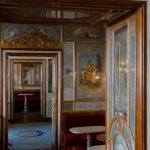 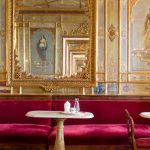 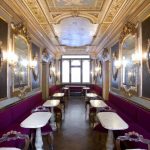 Room of the Illustrious Men 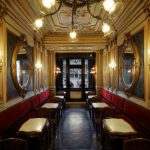 The Sala del Senato (Senate Room), the famous birthplace of the Venice Biennale, was decorated by painter Giacomo Casa who featured elements from the worlds of arts and sciences, optimistic images of all the coming century would bring. The Sala Orientale (Oriental Room) and the Sala Cinese (Chinese Room), painted by Antonio Pascuti, are adorned with oriental motifs: a caprice of exotic-looking women and lovers. One of the coffee house’s rooms became known as the Sala degli Uomini Illustri (Room of the Illustrious Men), after the prominent Venetian figures portrayed in the medallion oil paintings by Giulio Carlini. The Sala delle Stagioni (Room of Seasons) has been decorated by Cesare Rota, who depicted the four seasons as women. The Sala Liberty (Liberty Room) is elegantly decorated with an arched vault, wood wainscoting, and original hand-painted mirrors dating from the early 1900s. 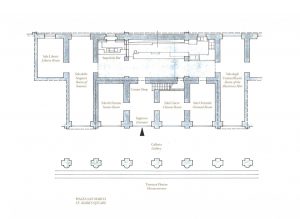 Quantity: 0 Items: 0
The Cart is Empty
0,00 €
0,00 €
Continue Shopping
Vedi Carrello Vedi Checkout
X
This site is registered on wpml.org as a development site.